There may not be a European qualification place available to the winner anymore, but that should not diminish the importance of the Scottish League Cup for all involved.

With the lure of a hefty prize money cheque, not to mention the opportunity to play in 60,000 plus people in the final at Hampden Park, there's no wonder that so many clubs take the Scottish League Cup very seriously. While some of the country's other domestic cup competitions can be seen as an unwelcome distraction, this tournament is very much in the hearts and minds of players, managers and supporters throughout the land.

Introduction to the Scottish League Cup 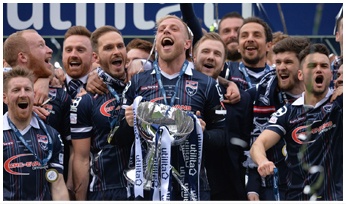 Known colloquially as the Betfred Cup after the bookmaker took up sponsorship, this year's edition will for the first time see the straight knockout format replaced by a group phase and then subsequent knockout matches. The idea behind this is to minimise the number of matches that the teams that qualified for Europe have to play (they enter here in the second round), plus it enabled the Scottish FA to introduce a two-week winter break in January.

The current holders of the Scottish League Cup trophy are Ross County, who defeated Hibernian by two goals to one in the 2016 final.

The Scottish League Cup dates back more than 75 years to 1940, where its origins as the Southern League Cup can be found. At that point, war time restrictions meant that another domestic trophy, the Scottish Cup, was temporarily suspended. The teams that entered were largely from the southern region of the country.

Immediately following the war the first Scottish League Cup was held during the 1946/47 campaign, with Rangers lifting the inaugural trophy after defeating Aberdeen in the final.

Initially the competition opened up with a group phase, as it has been reverted to in 2016/17, with eight groups of four teams doing battle prior to the knockout games. The way the seedings were compiled meant that a Division One team would always have a favourable draw from the quarter-finals onwards, and this format was scrapped soon after.

Upon the formation of the Scottish Premier League in the early 1980s, more Scots were becoming involved in expanded European competition. The consequence was that the Scottish FA decided to trim back the League Cup to a straight knockout format, with the final played prior to Christmas. This rearrangement was greeted positively by most involved, who welcomed an early season cup final and fewer tiring fixtures at the business end of the season. 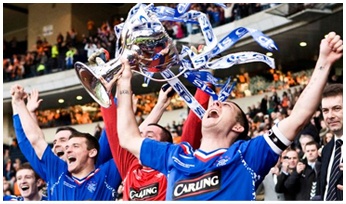 The competition remained this way for the next decade or so, until the 1999/2000 campaign when the semi-finals and final were moved to the spring to help alleviate fixture congestion caused by the ever-changing European tournaments. Those clubs that had qualified for the Champions League or UEFA Cup (now known as the Europa League) in the previous season were given automatic byes into the third round of the Scottish League Cup.

Rangers remain the most decorated team in Scottish League Cup history with 27 trophy wins, with Celtic the unluckiest team in the competition with 15 final defeats.

The dates for the Scottish League Cup 2016/17 are as follows:

As discussed in the history of the Scottish League Cup guide, the competition has reverted from a group phase format to knockout play and – as of 2016/17 - back again.

This season we will see the new format kick in, with eight groups of five teams playing each other once – two home matches and two away. In total there will be 40 teams contesting the competition at this preliminary stage, made up of the 38 league clubs and two from outside the four main divisions.

The rules within the group phase are the same as traditional tournament play, with three points awarded for a win and one for a draw. However, the slight difference to normal is in the bonus points system – introduced by the Scottish FA in an attempt to add increased excitement to the tournament. For any matches ending in a draw, an immediate penalty shootout will take place, from which the winner will an additional bonus point (on top of the point for drawing) while the losing team in the penalty shootout keeps their point for the draw.

The group stage set-up is seeded in three pots, with teams battling it out regionally in North and South divisions.

From here the eight group winners and the four runners-up with the highest points tallies will progress to the second round, where they will be joined by the four clubs that are competing or have competed in European competitions this season. They are then drawn against each other in a classic brackets system from Round of 16 to quarters, semis and the final.

The semi-final matches are to be played at a neutral venue, with the final traditionally held at Scotland's premier stadium, Hampden Park.

Unfortunately, the winner of the Scottish League Cup no longer earns an automatic European qualification place. This is because UEFA have decreased the number of places open to Scottish clubs in their flagship competitions.

Celtic and Aberdeen are currently the two main teams in Scottish football, so naturally they are the most favoured to do well in the Scottish League Cup. However, they both have the distraction of European football should they qualify for the main draw, and that may mean that they field weaker starting line ups due to this competition being played in the first half of the season.

That could play into the hands of the other teams in the tournament, and what a way it would be for Rangers to celebrate their return to the top flight by lifting the trophy. They have a talented manager in Mark Warburton, who has assembled a superb squad of young stars and more established names such as Joey Barton, Nico Krancjar and Clint Hill. That squad depth gives them an excellent chance in this competition.

We must not write off the chances of Ross County of course, who will be determined to defend their crown in style. And then there is Hearts too, who enjoyed a fine campaign in. 2015/16 to finish third in the Scottish Premiership behind Celtic and Aberdeen.

The Scottish League Cup often afford managers the opportunity to blood young talents and give their fringe players a run out, so it can be difficult to predict who will take the competition by storm.

But Rangers will be determined to win a piece of silverware to confirm their re-emergence at the top table of Scottish football, and this looks a fantastic opportunity for them. They will be hoping that Martyn Waghorn can fire the goals that lead them to glory on their bitter Glasgow rivals Celtic's home ground. The former Sunderland trainee and England Under-21 international has enjoyed a new lease of life north of the border after struggling mostly in English football. Waghorn has notched 32 goals at a rate of nearly one per game for the Gers (at the time of writing).

Another Rangers player who is always one to watch is Joey Barton. Whether it's his controversial comments off the pitch or his no-holds-barred tackling on it, Barton tends to be never far from the action. But to write him off as a clogger is unfair; the 34-year-old is a talented player with the ball at his feet and an extremely hard worker. Warburton may take the opportunity to rest his ageing legs in the Scottish League Cup, but be under no illusions if Barton does play in the latter rounds of the competition he will be a force to be reckoned with.

It has been a disappointing fall from grace for Kilmarnock's Souleymane Coulibaly, who burst onto the scene as a precocious 16-year-old after winning the Under 17 World Cup Golden Boot award. Now aged 21, he has so far failed to make the grade at Tottenham, Bari and Peterborough, so his move to Kilmarnock could represent the last chance saloon for the pacey striker. He's started off brightly enough with three goals in as many games (at the time of writing), so perhaps he has finally found his spiritual footballing home.

The bookmakers have made Celtic the firm favourites for the Scottish League Cup and rightly so given their dominance of domestic football in the country for so long.

But as we have already seen, they don't have much luck in the competition, and with a potentially exhausting European adventure to come this tournament will surely fall down the pecking order in terms of desirability. Ditto for Aberdeen.

So Rangers look the best bet given their lack of distractions, and with 4/1 available at the time of writing they represent a fine investment opportunity. They are perhaps a year away from seriously challenging for the Scottish Premiership title, so right now this competition represents their best chance of winning some silverware in 2016/17.