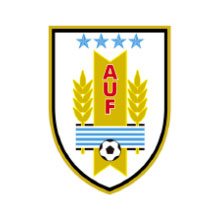 Two-time World Cup winners Uruguay have been placed in Group A for Russia 2018, alongside the host nation, Saudi Arabia and Egypt - the South Americans are favourites to top the group.

Uruguay finished second in the South American qualifying section behind Brazil, winning nine of their 18 games and drawing a further four. After a sticky patch in November 2016 and March 2017, Uruguay bounced back by finishing qualification with two wins and two draws to book their place at Russia 2018.

Edinson Cavani was the top scorer in the South America qualifying section, scoring ten times – at least three more than any other player managed.

Uruguay won the first two tournaments they entered, on home soil in 1930 in the inaugural World Cup and then in Brazil in 1950. More recently, however, they have played in the last two tournaments and finished fourth in South Africa in 2010.

Last time out, in Brazil, Uruguay paid the price for failing to beat Costa Rica in the group stage, as they finished second behind Los Ticos despite beating England and Italy and ultimately lost against fellow South Americans Colombia in the second round. The tournament was overshadowed from a Uruguayan point of view, however, by Luis Suarez’s bite on Giorgio Chiellini in Uruguay’s final group game – his subsequent four-month suspension meaning he missed the defeat to Colombia.

Experienced midfielders Nicolas Lodeiro and Gaston Ramirez were the most notable absentees when Uruguay cut their 26-man provisional squad down to the final 23. Otherwise, it is a squared featuring few surprises. Defender Martin Caceres is back in action after two months out injured. Caceres marked his return to Lazio’s team with a goal in a 4-3 league win against Fiorentina. The 75-time capped defender missed the China Cup as a result of his injuries, but is likely to slot straight back into the Uruguay starting line-up for the World Cup. Sampdoria’s Lucas Torreira was the beneficiary of Ramirez and Lodeiro missing out – he made his debut at the China Cup, and played both games.

Edinson Cavani was Uruguay’s top scorer in World Cup qualifying with ten goals – finishing as top scorer in the entire South American section as a result. He also scored in both China Cup matches against the Czech Republic and Wales. Luis Suarez has the more prolific international record, however – his penalty in the China Cup defeat of the Czech Republic was the 50th international goal of his career. Suarez also has a point to prove after two controversial World Cup tournaments – being sent off for deliberate handball in the 2010 quarter-final, and then infamously biting Giorgio Chiellini in the last World Cup.

Uruguay bounced back to winning ways at the China Cup in March, beating Czech Republic 2-0 in the semi-final before winning 1-0 against Wales to seal overall victory. It was a much better return than the previous international break when, a month after finishing their World Cup qualifying campaign with a 4-2 defeat of Bolivia, Uruguay drew 0-0 with Poland and lost 2-1 to Austria. Their final World Cup warm-up match saw them win 3-0 against Uzbekistan, with Giorgian de Arrascaeta, Luis Suarez and Jose Gimenez scoring the goals.

Despite facing the hosts in Group A, Uruguay have a good chance of topping the group – though they will face a difficult run through the knock-out stages regardless of which position they finish in.

It is likely to be either Spain or Portugal who Uruguay face in the last-16, and the South Americans have never beaten either of them – failing in ten attempts to beat Spain and two against Portugal. Even if they were to end that record, you would then expect them to be facing France in the quarter-finals.

Nevertheless, Uruguay do boast an experienced squad with key figures at both ends of the pitch – captain Diego Godin leads the back-line, while Luis Suarez and Edinson Cavani have scored 92 international goals between them – making them Uruguay’s top two all-time top goalscorers.

They also built up some momentum towards the end of qualifying and, after a small blip, clearly took that form into the China Cup too.

With that in mind, the odds of 4/5 with Bet365 to top the group are relatively generous – especially when you consider the lack of World Cup experience elsewhere in Group A.

Given it is either Portugal or Spain awaiting in round two (probably), however, you can see why they are just 5/4 to be eliminated at the last-16 stage.

Finally, in-form Edinson Cavani is 25/1 to win the golden boot – the same price as team-mate Luis Suarez. What will count against both, however, is the fact they are not expected to go deep in the tournament – losing ground on final-bound strikers as a result.

Recommended bet Uruguay to be eliminated in the last-16, available at 5/4 from Bet365.

Uruguay have been in good form of late and boast one of the best strikeforces in world football in Edinson Cavani and Luis Suarez, but the World Cup draw has not been kind to them beyond the group stage. They should get out of the group, but it will be difficult for them to go much further.

Uruguay at Russia 2018 prediction: Second round